Think UK medical students are unruly? Check out the sexual scenes in France

Despite being the training grounds of one of the most trusted professions, medical schools have quite an unsavoury reputation. Rumours abound of archaic hazing rituals and alcohol-fuelled nights out to “release stress”, ranging from the once-famous Princeton Nude Olympics to the recent much-publicised antics of my own fellow doctors-to-be. Thankfully, UK medical schools have been largely purged of such humiliating rituals and where they do exist, they are mainly mild and viewed as curious remnants from a different age. (Although we were once made to attend a “naked pub crawl” which was apparently once underwear-only, but these days large lab coats are allowed. It was, however, December. Amazingly enough, none of us made 9am lectures the next day.)

But right across the Channel we have France, which in many ways is a different planet. Much like in England, hospitals in France have rooms (salles des garde) for medical students to rest, eat meals and congregate between shifts. With one tiny difference – these rooms are decorated with pieces of art depicting students (warning: graphic content), doctors and other hospital staff engaging in graphic sexual acts. When I say “pieces of art” I mean full-length wall and ceiling murals, and in one case even a giant penis painted with names and faces of staff members. And if that wasn’t outraging your gentle British sensibilities enough, get this: these paintings are often painted by the students themselves, or commissioned from local artists with the full knowledge of the hospital staff. They don’t get stale either – each time a new batch of students arrives, the artwork is replaced. 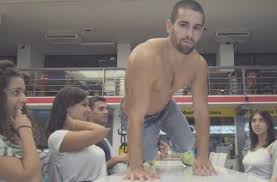 Done your double take yet? Sitting back down? Good. Because it gets better. As if having a giant pornographic mural of yourself staring at you while you eat your banana salad wasn’t enough, another ritual in these salles de garde is for females to expose their breasts to the room when they chant des poumons! (lungs). Men are not spared, and have to expose their buttocks on demand.

OK. Now you can start frothing at the mouth.

But put away your pitchforks for a moment, and let me put this in context. The French, after all, are well known for being rather strange. According to one commenter on a recent thread, a female French doctor was asked if she felt any shame or embarrassment at being forced to undergo this ritual – to which she replied that it was seen as a normal part of medical education. When asked what happened if she did not wish to participate, she replied that she simply wouldn’t have become a doctor. Anecdotal evidence is anecdotal, but there it is.

All this of course sounds horrific at first, but upon examining photos of said murals (strictly for research purposes, I swear) I noted that they do not feature women in demeaning or chauvinistic poses. Quite often, they depict simple naked romps and frolicking rather than penetrative fornication, and in many cases the women are also in control and enjoying themselves. The usual top-down hierarchy of hazing rituals is also overturned – these paintings are commissioned (and sometimes created) by the students themselves, which I imagine gives them all sorts of control over who gets painted doing what. This isn’t a defence, but remember also that the rest of Europe is rather blasé about nudity compared with Britain, as the nude beaches and mixed saunas will testify.

If medical schools in the UK are known for being bawdy hives of scum and villainy, their reputation in France is even worse. But these antics are seen as mere mischief rather that flat-out sexual harassment – much like the drinking games and sports nights made famous by UK medical students. Obviously there is a lot of opposition to these practices in France itself, but nothing like the trainwreck it would be if such things were allowed here in the sensible, civilised UK.

I’d be naive to suggest that UK medical schools are puritan nunneries free of gender discrimination and harassment. It was well known that some of our professors in Cambridge were … “old-fashioned” when it came to gender, so much so that if you wanted a question answered fast in anatomy theatre, you got one of your female friends to ask it. One of my female colleagues also was famously used as a mannequin to demonstrate the location of the coccyx, colloquially known as the tailbone (and yes, that is exactly where you think it is). But such antics must appear mild compared with what transpires across the Channel. As one commenter on the original article put it, “Médecins Sans Frontières indeed”.